It isn't easy when someone owes you money and refuses to pay. In some cases you can garnish the debtor's wages with his or her employer to help get the payments you are owed. However, even with a court order to garnish wages, it doesn't always mean the employer will follow through. In that case, you may want to send a letter pointing out that the company is not in compliance with the garnishment order.

Sometimes, you can get the ball rolling by sending a letter of non-compliance to the employer, along with copies of previously sent garnishment paperwork. If you are not sure what to include in the letter, click the image below to download a template that you can use as a starting point. See this guide to printables if you need help with the document. 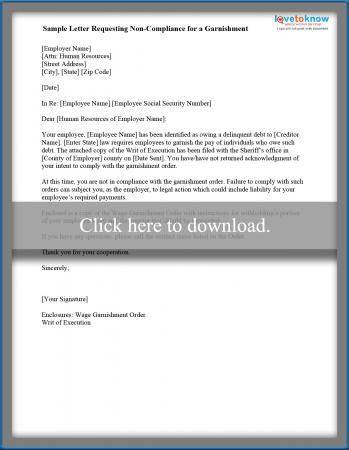 After you have downloaded the letter, you can click anywhere in the document to add your own information.

In any event, if the Writ of Garnishment has been served and the employer hasn't followed through with garnishing the employee's wages, the employer could face serious consequences.

Depending on the state you live in, non-compliance can result in serious consequences. For example, employers who are non-compliant with a garnishment order can be held in contempt of court, resulting in expensive fines or even jail time. In some cases, the employer can also be held responsible for the debt owed to the creditor, as well as any attorney's fees and expenses that follow. Reminding the employer of these consequences can sometimes influence the company to take action.

If the employer still fails to comply after you send the letter and you don't receive an answer or a claim of exemption from the garnishment, you may need to hire an attorney. A qualified attorney can follow through with filing a default judgment against the employer or help you move forward with other necessary court proceedings.