Press releases are an important part of every business marketing and public relations strategy. The goal of a press release is to create sufficient interest to generate a news story in media outlets. To do so, you must provide a professionally-written and formatted press release.

Guide to Writing a Press Release

Press releases must be about an interesting, newsworthy topic. They must also be well-written and formatted properly.

A press release needs to be newsworthy. It has to have a 'hook' - which is a particularly interesting element that has the potential to catch they eye of a reporter, blogger, or other readers. Subjects of newsworthy press releases include:

A well-written press release uses proper grammar and spelling and uses action-oriented text similar to what you would find in a newspaper article. When writing a press release:

If you would like to use a template to ensure that your document is properly formatted, use the free printable press release template provided here. Click the image to the right, and a pre-formatted press release template will open as a PDF document in a separate window. If you need assistance with the document, use this guide for Adobe printables. You'll be able to save, edit, and print it for your own use. 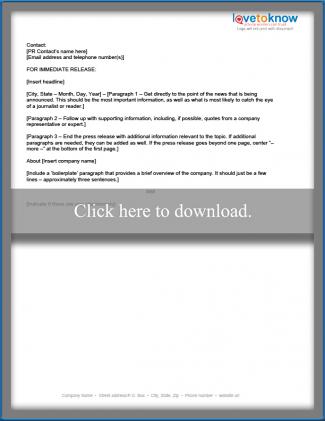 Key steps to follow when formatting a press release include:

ABC Restaurant Donates to Meals for the Homeless

Fullerton, California - April 20, 2013 -- ABC Restaurant, a popular downtown Fullerton establishment, is pleased to announce its new partnership with the Orange County nonprofit, Meals for the Homeless. Building on a long tradition of philanthropy, the restaurant seeks to minimize food waste while putting extra produce and meat toward a good cause.

"We regularly have to throw away food products we don't use at the end of the night," says Chef John Paul. "What better way to utilize perfectly good food than to create delicious soups and stews that can be used by Meals for the Homeless?"

According to Paul, ABC Restaurant began the partnership last week after learning of the nonprofit's widely publicized budget shortfalls. The company plans to continue the program throughout the winter and spring when need is at its highest.

"We were looking for someone with Andrew's unique skill set," says Maypole owner Luanne Mitchell. "We are delighted that someone of Andrew's experience has agreed to head up our commercial division."

With more than 25 years of experience, Barton has played a key role in the transfer of some of the area's most desirable commercial properties. Along with membership in the National Association of Real Estate Brokers, Barton is a member of the Million Dollar Round Table and holds a Masters in Business Administration from the University of Washington.

A well-written, properly formatted news release submitted to appropriate news organizations provides an effective public relations strategy to generate positive press about your company. By paying careful attention to detail and offering interesting information, you can keep your name in front of potential customers and improve your company's reputation.